Update number 3: A source at SDL confirms that they do plan to get away from Java, and a new or revised terminology module will be released sometime later on 2014. I don’t know yet if it will be a full-fledged MultiTerm replacement (less likely), or a more basic terminology module (what most users need anyway), but that is good news.

Recently, Studio 2014 users were prompted to update their Java 7 version from update 25 (that comes installed with Studio 2014) to update 45. Studio and MultiTerm always had sporadic issues stemming form MultiTerm’s reliance on Java, but to my best recollection this is the first time that a Java update breaks the core functionality like that.

The workaround for solving this problem is quite simple and based on removing the new 45 update and reinstalling the old 25 update until SDL will release an update to solve this issue once and for all.

Second Method: From within Studio 2014

If the error An error has occurred in the script on this page, or similar message that refers to an error in a script, has occurred when trying to add a term to the Termbase even after rolling back to Java update 25, lowering the Java security settings usually solves this:

To prevent automatic or accidental Java updates it is best to disable Java automatic update until this issue will be officially resolved.
This is not a mandatory step, just a recommendation. 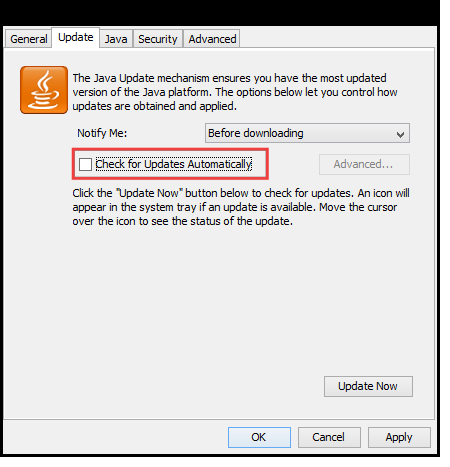 Once the issue is officially resolved it is recommended to turn on automatic updates again by following the above steps, only now selecting the Check for Updates Automatically checkbox instead of deselecting it.

I will update this short article with the relevant information when the official patch or update is released.

Earlier today SDL has released ‘Cumulative Update 2’ that brings Studio 2014 to version 11.0.3688.0 and among rest solves the incompatibility issue between MultiTerm and Java 7 update 45. I’ve updated my version of Studio and Java to test it, and it seems to indeed solve the problem.

If Studio’s Automatic Updates function is enabled but you were not prompted to install this update upon starting Studio, proceed to install the update manually: Switch to the Help tab on the Ribbon, and from the Actions tab group select the Check for Updates command. Follow the on-screen update wizard to complete the update.
This Cumulative Update is also available as a standalone file from the Download section of SDL’s Hotfixes and cumulative patches for SDL Trados Studio 2014 Knowledgebase article linked above, but unless there is a reason to do otherwise, it is recommended to update Studio using its built-in updater mechanism.

Unfortunately, at this point there is still no official update to solve this issue for Studio 2011. There is an unoffical workaround to solve MultiTerm 2011 incompatibility issue with Java update 45, and although the risk associated with installing it is probably minimal (and in worst case scenario it could uninstalled), I would recommend waiting a while longer, as long as using an older Java version is not a considerable problem on a specific machine running Studio 2011.